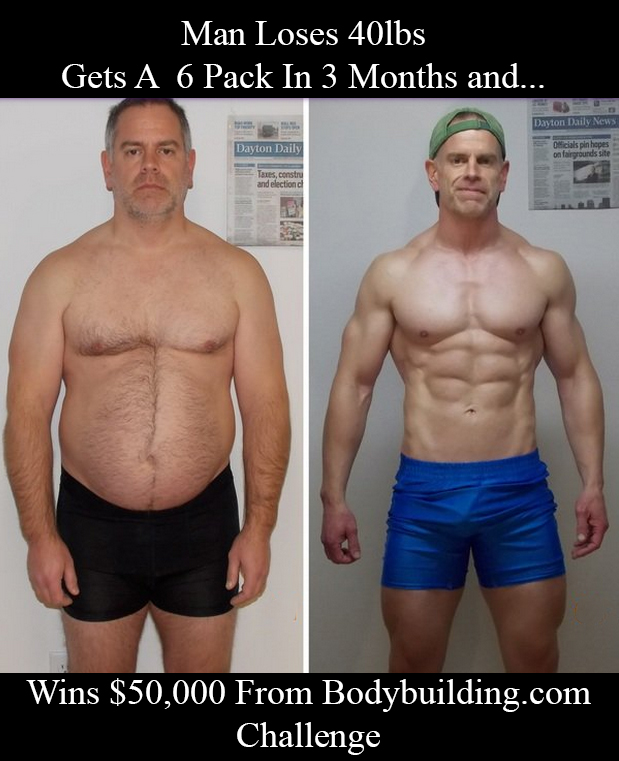 That’s right; 45-year-old Matt Manning wanted to make a change, so he entered a 12-week fitness competition called the $100,000 transformation challenge that was created by Bodybuilding.com and slowly began to transform.

Manning and another woman would each win a total amount of $50,000. As a result, Manning was the winner. With that much money on the line I’m sure a lot of people would jump on board.

In an interview, Matt Manning said he had stopped been active with his kids and made a decision to return to the gym and get in shape. But he had no idea it would land him $50 grand.

Manning said that he had a few health scales where he passed out and had to go the hospital by ambulance. He had some chest pains a few months later and not long after that he had to get a heart valve transplant.

He also went on to say that he made the right decision to go ahead with this challenge and that it has affected every aspect of his life. He said that he was happy that he can spend more time with his family now.

When his family saw the after pictures, they said that he looked like a superhero. When his daughter saw the before pictures, she said he looked miserable. Manning has proved to be a shining example on how to get the best results from the gym

If you find yourself in a similar situation as as Matt then this story might inspire and motivate you to workout and begin your own journey to ge the body you always wanted.

Although, you might be thinking, “how is it possible to go from losing 40 lbs in as little as three months? Well, my guess is that he had already had a history of working out over the years, so when he gained weight it was much easier for him to burn it off again.

Although some people will doubt and say, it’s impossible to burn off that much fat in as little as three weeks. But what they don’t realize is some guy’s bodies respond better than others to training.

Either way I have a lot of respect for guys like this, from a marketing respective or not he worked his butt off to achieve this result.