The question on a lot of gym users minds  is “Do Women Think Muscular Guys Are Hot“?

Before I continue, there is no body part that will get you very far if you have the wrong attitude, so you need to work on that before working on physical attributes.

It doesn’t matter if you have the perfect six pack and a toned body, most women will not consider you relationship material if you’re only interested in how your body looks.

The Body Type That Attracts Women? 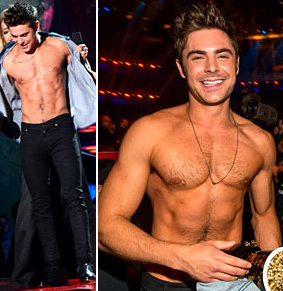 Zac Efron shows off his body at 2014 MTV Movie Awards

Then there are women who prefer guys that have a build like Henry Cavill in Superman Man of Steel.

I’ve been working out since my mid twenties, and I do it to stay in good shape, to feel healthy and hopeful live till I’m old.

If a woman says she won’t date me because my muscles are too big, then that’s her issue not mine.

From what I have researched, Women are physically attracted to guys like Zac Efron or Cristiano Ronaldo  in opposed to the Dwayne Johnson Hercules Physique.

It’s no wonder how Zac Efron got voted for best body performance at the MTV Movie Awards In early 2014.

That surprised me because I’d imagined it would be some ripped dude like one of the guys in the movie 300.

Personally, I’m slightly more muscular than Zac Efron and Cristiano Ronaldo, but I’m quite happy with that.

Although, some girls will admit finding big muscular guys more attractive while other girls find them a complete turn-off.

Getting to know the real you is probably missing out on a good thing.

Sure enough, it feels amazing having rock solid abs and huge biceps bursting through your shirt. But It doesn’t necessarily mean you will get laid often and have hot sexy girls touch and caress your chest and sneak a peak at you when you’re busy talking to your friends.

Don’t get me wrong, some girls check me out whenever  I wear tight shirts, that show off my arms. But who really knows what they’re thinking?

They might just be thinking, “wow, his arms look like they are ready to explode”, or “I  wonder what It would feel like to have those strong arms pick me up and throw me down on the bed.”

It Doesn’t Matter What They Think!

I’ll finish off by saying that some women like muscular guys and some like slim and toned guys better.

It may be true that women who say they don’t like big muscular men simply because they are unattainable?

Could it be that average women can’t get a date with bodybuilder types, so they end up settling for average guys that are fat and out shape? Who knows!

You should only work out for yourself and not give a damn what women think and what your friends say.

If you want to build huge muscles like Arnie or Ronnie Coleman, then go ahead and don’t let anyone try to stop you. I don’t know many guys who are skinny who doesn’t want to build muscle and get big.

I’ve always admired Arnold Schwarzenegger physique and I always will. But don’t I want to get a body like Arnie, no! Not because women say he looks too buff. Even if I did want a body just like Arnie, it’s very unlikely it will ever happen.

Arnold Schwarzenegger was able to do what most men struggle to achieve and had one of the best-developed physiques of all time.

So the bottom line is, the only workout to get the body you want and not just for the sake of getting girls and impressing your mates.

If you’re in good shape, you will get stand out from the crowd and will appear more attractive then the guy who don’t workout. But attitude and personality is what’s really important.

Also, If there are any women reading this, please leave your comments below and I’m sure a female opinion will benefit a lot of guys that read this.

So in case you’re still wondering whether or not women find muscular guys hot or not, according to the  Mens Health Website I’ve created this infographic with a list of 9 hottest male body parts ranked by women.

How To Build V-Taper Upper Body The Natural Way

How To Get An Aesthetic Body Naturally

Super Charge your Muscles with these Best Protein Sources

How to Get the Best Results From The Gym

The Venus Factor Review – Weight Loss Program For Women Only